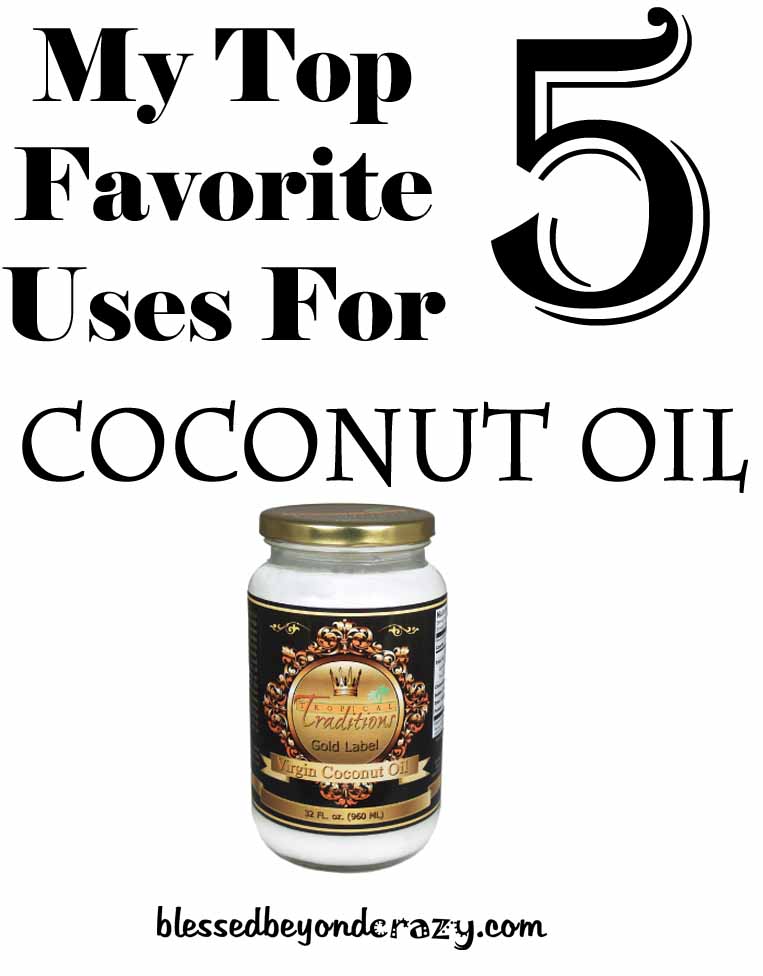 Coconut Oil is all the rage these days! It’s gotten the reputation of being a “cure-all” and “fix-all” miracle cream/oil/natural substance.

And I’ll have to admit I’ve jumped on the bandwagon!

When my husband sent me this Success Baby meme, I laughed maybe a little too hard because it pretty much describes me right now! 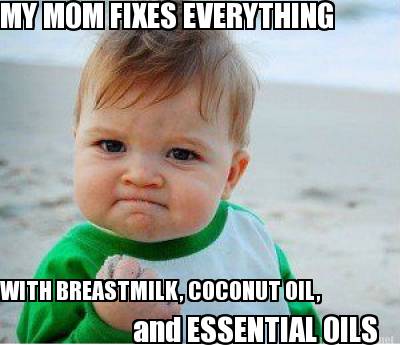 There are about a bazillion different ways to use coconut oil!! It would probably be faster to list the things that coconut oil doesn’t fix/improve, but I can’t think of any right now. So I’ll just tell you my top 5- in no particular order.

This was the whole reason I bought a jar of coconut oil in the first place.

I HATE removing my makeup. I almost never wear mascara because I hate trying to take it off. Normal makeup removers don’t seem to work for me. Well… they work fine for foundation and eye shadow but not mascara! Makeup remover burns my eyes and removes my eyelashes while somehow still leaving the mascara! The next morning my children run in fear because scary mommy with black mascara all over her face doesn’t look like someone they want to cuddle with.

Okay, maybe I’m exaggerating just a little (my kids aren’t really afraid of me, more like point and laugh/looked confused: “mommy what happened to your face?”)

So when I tried coconut oil the first time it was to remove makeup and I was sold. I literally told my husband, I don’t care if all the other “hype” about coconut oil is wrong, I’m keeping this stuff on hand just for makeup removal.

It removed all the mascara! The next day there was no black whatsoever on my face or eyes. All my eyelashes were still in tack and I think they were even softer. Let’s just say I’m willing to wear mascara more often.

There are a million tutorials on Pinterest on how to make your own makeup remover wipes with coconut oil. I don’t make mine ahead of time because I have heard they can turn moldy and I’m not going to use a paper towel on my face…nothankyou!

I melt some coconut oil just by holding it in my hand, rub it on my eyes and use a wet wash cloth to wipe off the makeup, then repeat until all the makeup is off. Just be aware that whatever wash cloth you use can be stained by your makeup. When I’m done I put a small layer of coconut oil on my face to act as a moisturizer.

Another plus is that coconut oil doesn’t burn my eyes. If I do get some in my eyes it just turns my vision blurry for a moment, but doesn’t burn. I’ve read that you can purposely add coconut oil to your eyes if they are itchy/irritated and the oil will help your eyes.

Sugar popcorn is one my all time favorite snacks. I think I get this from my mom.

We use a Whirley-Pop Stovetop Popcorn Popper

. This by itself makes incredible popcorn! And for a really long time we made it with canola or vegetable oil. This wasn’t exactly a “healthy snack.”

Once we started making popcorn with coconut oil we were blown away by the difference! It is a gazillion times better! I don’t even know how to explain how much better it is. It gives the popcorn a very subtle hint of coconut. It makes it sweeter so we use less sugar.

Vegetable and canola oil are so bad for your health, I’m really glad that we don’t use it anymore!

Another weird thing about our switch is that our Whirley-Pop cleans up so much easier when we use coconut oil. It doesn’t leave a residue or build up like the other oils. Coconut oil has such a low melting point that all we really have to do is run our Whirly-pop under hot water with a little bit of soap and it cleans right up with basically no scrubbing.

Well I made fried chicken the other day and this time I decided to give coconut oil a try, instead of canola oil.

It turned out AMAZING! The taste and texture were both so much better! The chicken wasn’t as chewy or greasy. Before when I ate fried chicken I could only eat one piece because there was so much grease that it bothered my stomach and made me feel sick. But with coconut oil it wasn’t like that at all!

If you want the same recipe you can find it here: The Cozy Old Farmhouse: Farmhouse Fried Chicken

Adjustments: That is the absolute best homemade fried chicken recipe I’ve ever tried! However, it isn’t gluten free. When I make it gluten free for my husband and daughter I substitute corn starch for regular flour and it is still amazing!

I’m slowly learning that coconut oil can be substituted for basically any type of oil.

Have you ever used massage oil or lotions that make your skin feel a bit… gross? Like you skin can’t absorb it so it just feels greasy and oily until you eventually wash it off.

Once I discovered coconut oil I was much happier!

You can use coconut as a straight substitute for lotion. I started making my own lotion using 2 parts Shea Butter

and 1 part coconut oil. I also add a few drops of essential oils, such as lavender (but you could use any scent that you like). In the winter if your skin is really dry you can also add little bit of olive oil, but I think that tends to make it too oily. Melt the oils together in a double broiler. Let them cool until butter consistency, then use a mixer to “whip” the lotion. Store in a cool, dry place.

For massage Oil I just use straight coconut oil with a few drops of essential oil.

Shhh… Don’t tell my kids what placebo means!
It’s not that I’m anti-medicine, but I do believe that it should be used at an absolute minimum.

So when it’s bed time and my kids are exhausted, they are whining, they are thinking of every excuse to stay up and one of their favorites is to complain about their legs hurting. Now I do believe that my kids have growing pains from time to time. But isn’t that just ironic that it always happens at bed time? And only on the nights that they are really tired. Momma wasn’t born yesterday!

Sometimes I rub coconut oil on their legs and sometimes I give them a spoonful of coconut oil. Sometimes I do both. They think they are getting medicine. It almost always works!

It is difficult being a toddler. If you haven’t noticed toddlers fall down a lot. My children love playing outside, and with that comes the ailments I just mentioned. I use neosporin and other appropriate medical treatments when my children get hurt. But sometimes children can be so dramatic! And after my daughter stubs her toe she is just going to keep on wailing until I do something. So out comes the coconut oil! Same thing for hang nails. My kids are starting to get to the point where they just ask me for coconut oil instead of medicine.

Again, I am not a doctor or health professional so I can’t make any medical claims. From my own personal experience when I get a scratch or something of that sort I put coconut oil on it and it really does seem to ease the pain and heal faster. Maybe placebo’s work on me too… or maybe there is more to it…

I use coconut oil every single day for multiple different reasons. I didn’t even begin to scratch the surface on all the uses for coconut oil.

If you are looking for a brand of coconut oil to buy I strongly suggest the Tropical Traditions Gold Label Virgin Coconut Oil. It is the best quality of coconut oil that I have ever tried!

We are currently running a giveaway for a GALLON of this high quality oil! If you click here you can enter to win and learn more about Tropical Traditions!

So what is your favorite use for coconut oil?